"Eugene Sandow - How Can 'The Standing Miracle' Help You?" 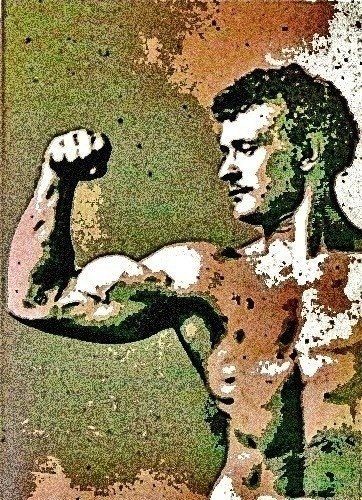 Want to see how 'The Standing Miracle' can help you?

If you grew up during the 1970s, chances are you will have marveled at physique icon Bruce Lee.

The "Little Dragon's" physique was so startling, that it would go onto influence bodybuilders such as Lee Haney, Lou Ferrigno, and six-times Mr. Olympia, Dorian Yates.

But who inspired the martial arts master?

Until his death in July of 1973, Lee would amass a vast personal library of well over 2,500 books that not only featured the current writings of the day, but included the strongmen of yesteryear. One such strongman rightfully stands shoulder-to-shoulder with the lifting greats and weight room gods. His name?

An inspiration, his feats of strength were legendary and continue to marvel even to this day.

To get your FREE copy of Eugene Sandow's classic "Strength and How to Obtain It" simply enter your name and email below.

One of the Most Perfectly Built Men in Existence

In his prime, Eugene Sandow's physical endowments were considered exemplary.

Indeed, Professors Virchow of Berlin, and Vanetti of Florence, expressed that Sandow - from an anatomical point of view - was "one of the most perfectly built men in existence!"

This judgement was further endorsed by scores of English medical men of high repute, as well as by hundreds of professors and well-known experts in the science of physical education.

Indeed, it was often remarked that Sandow was a standing miracle.

We would therefore do well to follow his lead - where possible - in the hope of realizing our own muscle building dreams...

There can be no finer example.

Sandow built his foundation of strength, and the muscles to go with it, primarily using dumbbells. This way of training continued into his touring performances and throughout his lifting career.

On stage it was commonplace for The Mighty Sandow to hoist 300 lb dumbbells with relative ease, along with other spectacular feats. This way of lifting - and the balance required - fashioned a physique that was not only muscular and strong, but was agile too...

This agility meant Sandow excelled at most physical disciplines including gymnastics in his youth, and later wrestling. Indeed, such was Sandow's prowess in this craft, that he would take on three wrestlers at a time!

However, it is for his feats of strength and peerless muscular development that Sandow shall be remembered.

And while this great athlete's strength achievements are certainly beyond the typical trainee, it serves us well to consider this man's miraculous might.

Such poundages are superhuman. It is no surprise this great lifter was once heralded 'The Strongest Man on Earth'.

But how did Sandow get so strong?

Strongman Sandow has often been cited as the godfather of modern-day muscle building.

This princely position was earned not only by his astounding strongman achievements, but through his scientific research and attention to detail.

Below are some of his findings his eager students put to effective use.

1. Whenever possible, exercise should be taken in the fresh air.

Breathe powerfully and FULLY. This often overlooked element is vital in your muscle building development. Oxygen is an important fuel - USE IT!

2. Barbell exercises, and in particular, dumbbell workouts, should provide the core of your muscle building routine.

Sandow proclaimed, "Nothing, in my opinion, is better than the use of the dumb-bell, for developing the whole system, particularly if it is used intelligently, and with a knowledge of the location and functions of the muscles."

Proven muscle building exercises include the clean and press; the deadlift; and the squat.

Make these movements the backbone of your workout and prepare to grow.

4. Exercises should be taken up progressively.

Over-training should be avoided at all costs as this practice can cause fatigue and injury. Recovery is a crucial component of the muscle building process, so be sure to get adequate rest and DO NOT overtrain!

5. A mind-body connection should be employed when exercising.

Sandow stressed that there was an important link between "putting the muscles to the strain by concentrating the mind and will-power upon the manipulation of the weights"... Moreover, "exercise should be systematic, persistent, and thorough."

Yet Eugene Sandow wasn't only strong, he was courageous too.

There aren't many men brave enough to fight a lion - yet that is exactly what happened in San Francisco!   Unarmed, the godfather of bodybuilding would battle the 530 pounds beast...

But who would be crowned king of the jungle?

To continue reading the full thrilling story, enter your name email below to download your FREE copy of Eugene Sandow's classic "Strength and How to Obtain It".