"Minimalist Training - How Little Can You Do to Get Insanely Strong?" 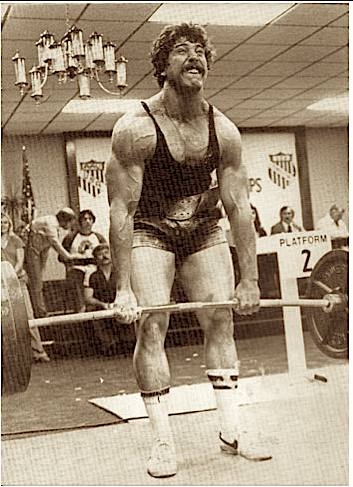 Searching for someone who typifies minimalist strength training at its hardcore best? Then look no further than Mark Chaillet. Not only was this 1980s powerlifter insanely strong, but he achieved his Herculean physique with a barebones program that beggars belief.

To say Mark's routine was stripped back to its absolute basics would be an understatement. Here is what his routine looked like:

Mark's training methods were equally basic, too. During his workout sessions, he would simply work up to a heavy single in each of the three powerlifts.

"I can count on one hand the number of times over the years I saw him do any lift or exercise other than the three powerlifts. Every once in a blue moon I might see him perform a set of curls, or do a set of stiff leg deadlifts, but nothing consistent other than the big three."

And this consistency with the big three paid off handsomely in muscle and might.

Yet when you stop to really think about it, is it any surprise? Right here, Mark's abbreviated approach follows the same no-frills formula promoted by strength aficionados Bill Starr, Brooks Kubik, and Dr. Ken Leistner among others.

The truth is, you don't have to train long to get insanely strong.

Marty Gallagher agrees, and had this to say about Mark Chaillet's minimalist strength training methods:

"I think that most dismiss his approach as short-sighted. Plus, I don't see very many 269 pounds men deadlifting 880 nowadays."

Of course, this style of strength training is nothing new. Forty years before Mark Chaillet was an APF world champion powerlifter, Texas well-digger William Boone employed similar minimalist methods to get insanely strong.

It's a tough task digging holes down through layers of soil, limestone, sandstone and shale to reach the gravel and sand that catch and store water deep underground. Yet that was strongman William Boone's back-breaking job in rural Louisiana in the 1940s. Toiling under a scorching Texas sun, he would routinely work 14 hour days, then return home to train.

Boone's strength system was therefore borne out of necessity. Since time was a luxury, every second counted when he came to weight train.

Following an ultra-abbreviated workout, he hit the pig iron twice a week with a stripped-back routine that consisted of just one exercise. Over time, this well-digger worked up to gargantuan weights in his chosen exercise. When he reached this point, he would switch to a fresh exercise and once more resume training on this single movement exclusively until he had neared world-record poundages.

Some numbers for you:

Using this one-exercise protocol, Boone was able to perform a 700 pound deadlift in addition to performing a 420 pound jerk and 360 pound push press. Proof-positive that minimalist training principles work.

We write about William Boone's barbell exploits in our book Wolverine Strength Secrets and one thing continues to shine brightly: it doesn't matter if you're a desk jockey, a 1980s powerlifter like Mark Chaillet, or dig holes in the sweltering Texas sun, minimalist training is just as effective today.