Sick of guys curling in the squat rack?

Build your own homemade squat rack like the 300-pound lifting "monsters" from the 1940s. 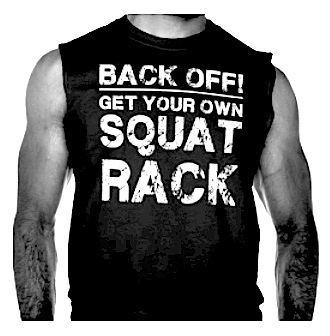 Over half-a-century ago, an innovative and radical method for transforming the body swept America.

Creating 300-pound lifting "monsters", this bulk-building experiment was to revolutionize strength training with principles that have since been helping the average man get big and strong.

Developing many of the training programs that are still the most effective ways to build your body, Joseph Curtis Hise would promote one exercise above all others.

The benefits of high repetition deep-breathing squats saw J. C. Hise gain 29 pounds in a month - results which were startling.

But what was perhaps most startling, was the simplicity of Hise's formula. By combining the squat exercise with wholesome food, milk and rest, Hise would produce incredible gains in strength and muscular size.

This simple formula was just as evident in his training methods. Exercising outdoors, Hise would fashion homemade squat stands made from tree limbs braced against the wall of a shed.

By using the simplest homemade equipment, effectively utilized, Hise proved how even the most primitive of settings can produce remarkable results.

So how can you do the same? Just like J. C. Hise, you can build a cheap squat rack which is perfectly serviceable and is friendly to your pocket.

For example, a home squat rack can be freestanding uprights on heavy bases, a self spotting squat rack, a power rack - or if you train outdoors 1940s Style, tree limbs braced against the wall of a shed!

Writing in Super Squats, Randall J. Strossen describes how a San Franciscan trains in his condominium using two sturdy bar stools for homemade squat stands, and how another urbanite developed a collapsible home squat rack that he braced on his bedroom dresser and later stored under his bed.

As long as you are able to squat safely, your only limits are in your imagination.

Sick of guys curling in the squat rack?

Then why not build your own homemade squat rack like the 300-pound lifting "monsters" from the 1940s. The benefits? You get the freedom to squat and it won't blow your budget.