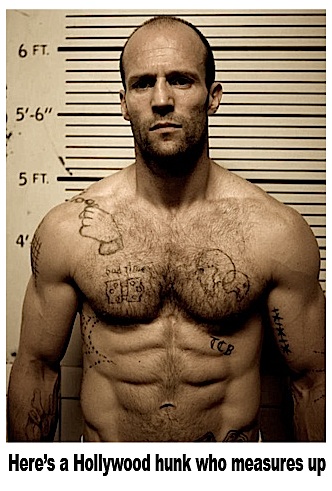 Want a Hollywood body? Looking to create a strong and visually stunning physique that turns heads and stops traffic?

Well, it's no surprise. A quick glance at the fitness mags, reveals a tidal wave of tinsel town transformations featuring many of the hot Hollywood actors.

Lighting up the covers in any given month, you can expect to see stars such as Chris Evans, Hugh Jackman, or Chris Hemsworth. And these guys all share the same desirable characteristic. Can you guess what it is? Yep. They've all got a lean Hollywood body.

So how did the lean Hollywood look suddenly become so popular?

Well, it's nothing new. Not so very long ago, it was perfectly okay to train to improve the appearance of your physique. Yet somehow, we lost sight of that. From nowhere, muscle sites began to care more about the raw numbers (the weight on your bar) - so, instead of building an attractive body, the question that commonly got asked was, how much can you lift?

And this presents us with a problem. How so? Because this "raw numbers" approach is really unhelpful to you when your goal is an aesthetic physique.

When Bigger is Not Better

You see, when creating the lean Hollywood look, there is a clear cut-off point where bigger is not necessarily better.

Women instinctively understand this. Which is why, when confronted by the juiced-up muscle monsters in bodybuilding mags, the common response is: "Ugh… that is such a HUGE turnoff!"

Well, the answer is scarily simple. Most women simply aren't attracted to muscle monsters. Instead, gals like regular-sized guys who are in good shape (think Jason Statham in our picture above vs. Jay Cutler).

Now, this isn't to say that a man's sole motivation for weight training is to attract women. Of course it's not. But let us be honest here - it can often be a major reason.

So, if you want to get the lean Hollywood look women lust for, you need to avoid the "Meat-Head Madness" lie being peddled in gyms, that appearance and style is only for pansies.

I talk about building a lean Hollywood body in my latest book Wolverine Strength Secrets.

And the really cool part?

I reveal the fastest way to build muscle and get the physique you want WITHOUT becoming a slave to the gym or starving yourself with silly diets.

To find out more and claim your copy, simply click the link below...