Quickly add 50 pounds of muscle squat training with this secret from the 1930s. 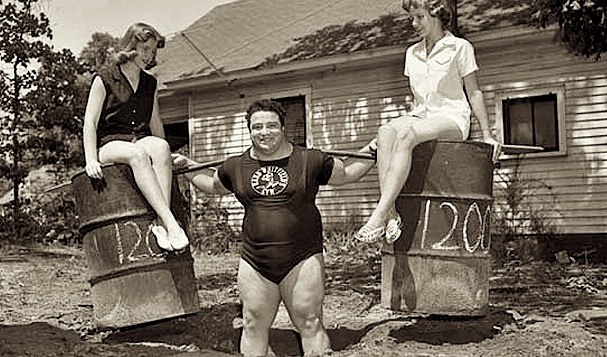 Our story begins with Mark H. Berry, whose contributions to strength training included serving as the coach of the American weightlifting team in both the 1932 and 1936 Olympics.

And his most widespread and enduring gift to strength training? The promotion of heavy squats.

Consider how Mark Berry added over 50 lbs muscular body weight to his own slim frame, and how his students made comparable gains, and it is no surprise Berry was said to have ushered in a "new era".

But just how did Berry work this muscle building miracle?

With the aid of squat racks, Berry encouraged his students to use heavy, flat-footed squats.

And here was Mark Berry's secret: by working up to weights in the 300-500 lbs range, Berry's students began to gain muscular bodyweight at staggering rates, thus proving the efficacy of the squat exercise when looking to build muscle quickly.

At this time, the young Berry had become the editor of Milo, and soon its publications were flooded with dramatic tales detailing how it was possible to build a superman physique using basic equipment and simple exercises.

With only barbells, dumbbells, and kettlebells; Berry championed compound exercises such as squats, deadlifts, presses, snatches, cleans, jerks, continentals, straddle lifts, and many more. This focus on the "proven muscle builders" - and the squat exercise in particular - were to pay remarkable dividends.

One of these dividends was the building of muscle size.

Yet this wasn't the only benefit of Berry's squat routine. Other noteworthy heavy squats benefits included:

As you can see, Berry's methods not only improved the development of the human musculature, but also boosted overall fitness and general health.

In the same way all boats rise with the tide, effective strength training positively impacts the "whole of the body" and not just its trained parts.

Squat training can be as productive today as it ever was.

Mark H. Berry and his students knew this back in the 1930s, as evidenced by their staggering achievements; just as those that followed in Berry's wake realized this too. (Strongmen Paul Anderson and Doug Hepburn would later rewrite the record books on the back of this mighty exercise.)

So are you looking to build muscle quickly? Heavy squats from the 1930s could do the same for you.