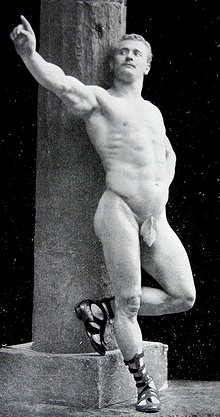 The strongmen of yesteryear knew a thing or two about mass building workout routines and those methods which guarantee strength and size increases. Employing little more than a barbell, a mountain of iron, and plenty of nutritious food - the following routines have delivered outstanding gains for over half-a-century and can do the same for you.

So what makes these mass building routines so productive? Simply, the best full body workout must target ALL the major muscle groups in the most efficient and effective manner, thereby triggering a muscle building response.

The following full body workout routines do all this and more with sometimes startling results.

Joseph Curtis Hise often features on this site, so it seems only right that we should begin our mass building odyssey with this man mountain.

Back in the 1930s, J. C. Hise found his body weight stuck at an already considerable 200 lbs. Having attempted the standard routines of the day, Hise would read about the jaw-dropping results of Mark Berry and 20 rep squats.

Excited at his find, Hise formulated his own mass building routine. How effective was his program? In just one month, Hise would add 29 pounds of muscle to his frame. By the time he reached a body weight just shy of 300 lbs, Hise had 19 inch arms, 39 inch legs, and a barrel-chest that measured 56 inches.

Here is that program:

The benefits of squats - and deep breathing squats in particular - have long been recognized as a mass builder of the highest order. Yet for 1940s Vim magazine editor Roger Eells, they would pluck him from his deathbed and transform into one of the world's best built men.

Following a bad airplane accident and a life-threatening bout of tuberculosis, Eells began working out with barbells in an attempt to build his body. At first he did 20 rep squats in rapid fashion and without any attention to his breathing. Results were disappointing at first, until Joseph Hise intervened and explained the way to big gains. And the secret? Deep breathing squats.

As reported by Harry Paschal, this special squat would help Eells gain 35 pounds in one month and rocket his body weight from a painfully frail 109 lbs to a muscular 185 lbs.

When Hollywood actor Rick Jason walked into Willis Reed's gym in the 1950s, Jason stood six-feet-four and tipped the scales at a slight 150 lbs. In just three short months of training, the actor would gain 25 pounds of muscle, add an inch and a half to his collar size, three inches to his chest, and boost his biceps from twelve and a half inches to fifteen.

How did he do it? The man behind this transformation was gym owner and Hollywood strongman Willis Reed.

Built like a tank, the full body workout Reed used to get Jason into shape trained the largest muscle groups to the maximum; i.e., the legs, chest and back. Also, like Hise and Eells before him, Reed would stress the health and mass building benefits of deep breathing squats when looking to get big and strong.

Using little more than a barbell and the burning desire to succeed, the mass building routines of yesteryear have delivered outstanding gains for over half-a-century. Can they do the same for you?