Car Chaos and Pushing for Power 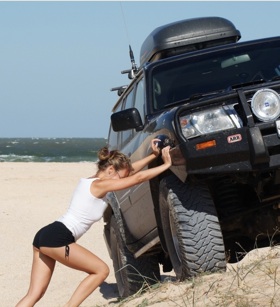 Sling the sled. Pushing for power is easy when you follow strongman Dan John's training advice.

Baby, You Can Drive My Car

The Triumph Dolomite Sprint was the prized possession of my schoolmate Stephen Matthews. Stephen's dad presented the car to him on his 17th birthday, and my friend was proud as Lucifer when he took charge of the vehicle's keys. Today Stephen is a RAF helicopter pilot, but back then he was just like the rest of us: your typical spotty, overworked teenager studying hard to pass their exams.

When Stephen got the motor, he generously offered to taxi his closest pals into school. Since we had been buddies since kindergarten, I fortunately fell inside this group which meant an extra 30 minutes in bed for lucky me!

The mob that traveled the mile or so into class would often vary. Sometimes the car would be crammed with students squashed into the back seat like your proverbial sardines. Then on other days, depending on when people had lessons, there might be only one or two of us. These days, as I am about to report, could be torture.

You see, Stephen's prized Dolomite wasn't a young, fresh off the assembly line type of car. She was old - or what today, you might call a "classic". Yet what happens with vehicles of such vintage, is this: they become temperamental. Or, to be more precise, they don't always run to order.

Break downs were common. And during the icy months of winter, the Sprint's engine would frequently cut-out and no amount of coaxing, pleading or swearing would get the bugger to start. This meant one thing that filled us all with sick dread: we had to get out and push.

Now, on those days when we all had classes, the push was a breeze. Cussing and jostling for space at the car's rear bumper, we would move that jalopy like it weighed little more than a Sainsbury's shopping trolley. But what about those times when our numbers weren't so great? Dear Lord... those days were horrible.

On more than a handful of occasions it would be just Stephen and me when the Triumph Dolomite coughed its last and rolled to a shuddering stop. In a cruel twist of fate, this breakdown often occurred on a frosty stretch of road in a deserted part of town, which meant I would have to jump-start the car unaided.

When you consider the Sprint's cited curb weight is 1,015 kilograms, or a metric ton, this effort suddenly becomes lung-burstingly significant.

When the God's were smiling down on you, that old rust bucket's engine would cheerfully roar into life. But what about those times the big fella upstairs was taking a nap? Suddenly the early morning clunker-push becomes a grueling endurance event you might witness on World's Strongest Man!

Why the sorry tale?

Well, this story is significant because it illustrates the importance of hard work. Today, gym rats up and down the land achieve their conditioning using the Prowler or Sled, but here is something a lot of folks don't realise: you can just as easily enjoy similar lung-bursting benefits with a low-tech approach.

Strongman and coach Dan John often talks about this valuable training tool. His advice? Simply find a car and push. This effort not only works your heart and lungs, but your arms, back, chest, stomach, thighs, calves... heck, it even works your toes!

Reason enough to make it a valuable addition to your routine, don't you agree?

Pushing for Power to Muscle Building