Want to build your body?

The squat exercise is your secret shortcut to big arms, powerful shoulders, and a muscular chest.

The Barbell Squat - King of Exercises 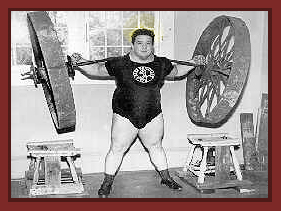 Imagine building your body. Chances are you will visualize bigger arms and shoulders, and a muscular chest - but not big legs. For many, building leg muscles are an afterthought and something only to be considered after the more glamorous body parts have been taken care of.

For those who DO build their leg muscles, there is a similarly good chance you will get your strength training workout on the leg extension machine, or perhaps the leg press. Equally, there is an excellent chance you do not squat.

And right HERE is the typical trainee's number 1 mistake.

So why is the barbell squat exercise so important and why must you endeavor to make squat training the core of your workouts? To be blunt, heavy squat work - and its many variations such as the lunges exercise - is the fastest route to big arms, powerful shoulders, and a muscular chest.

This paradox was unravelled over half a century ago:

Consider how Mark Berry added over 50 lbs muscular body weight to his own frame, and how his students made comparable gains, and it is no surprise Berry was said to have ushered in a "new era" as a direct result of his emphasis upon intensive training of the body's largest muscle group, i.e., the legs.

Check out some of Paul's numbers:

And here is what Paul Anderson's rival, Doug Hepburn, had to say about the best testosterone booster:

"Of all the exercises used to develop body power, one stands alone. I am referring to the Deep Knee Bend or Squat. No other single exercise can give the trainee greater overall strength in return for the time and effort involved."

And from bestselling author, Robert Kennedy:

"Yes, the king of exercises, the squat, will help your overall gains more than any movement."

What Other Visitors Have Said

Click below to see contributions from other visitors to this page...